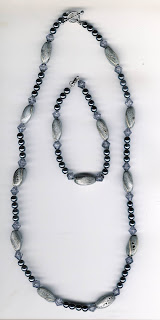 Grey Pearls, Rock and Crystals in a 22" necklace & 7" bracelet.
Posted by DarcelRose at 4:41 PM No comments:

Purple Pearls and Purple Dyed Jasper in a double strand necklace
Posted by DarcelRose at 7:32 AM No comments:

A pearl is a hard object produced within the soft tissue (specifically themantle) of a living shelled mollusk. Just like the shell of a mollusk, a pearl is made up of calcium carbonate in minute crystalline form, which has been deposited in concentric layers. The ideal pearl is perfectly round and smooth, but many other shapes of pearls (baroque pearls) occur. The finest quality natural pearls have been highly valued as gemstones and objects ofbeauty for many centuries, and because of this, the word pearl has become a metaphor for something very rare, fine, admirable, and valuable.

The most valuable pearls occur spontaneously in the wild, but they are extremely rare. These wild pearls are referred to as natural pearls. Cultured or farmed pearls from pearl oysters and freshwater mussels make up the majority of those that are currently sold. Imitation or fake pearls are also widely sold in inexpensive jewelry, but the quality of their iridescence is usually very poor, and generally speaking, artificial pearls are easily distinguished from genuine pearls.

The pearl holds the distinction of being the only gem that is formed within a living organism. A pearl is made when an irritant, such as a grain of sand, finds its way into the soft tissue of the oyster. To protect itself, the oyster begins to cover the irritant with sheets of nacre. Nacre is the smooth lining material that these mollusks produce that covers the insides of their shells. Layer upon layer of nacre is applied to the irritant, producing, over a period of 1 - 3 years (or more), one pearl. Pearls were considered among the most precious stones in the ancient world. In the Roman empire at the time of Christ pearls became quite the rage. Julius Caesar, who had a particular love for pearls, paid the equivalent of $1,000,000 for a single pearl. This gives significance to Jesus’ story about the “pearl of great price.” For many centuries the pearl was known as the “Margarite” from the Greek word for pearl, margarites, which is the name of the oyster that produces the pearl found in the Persian Gulf and Red Sea, margaritafera vulgaris. It was not until the King James Version of the Bible that the term pearl was used.

According to Rebbenu Bachya, the word Yahalom in the verse Exodus 28:18 means "pearl" and was the stone on theHoshen representing the tribe of Zebulun. This is generally disputed among scholars, particularly since the word in question in most manuscripts is actually Yasepheh – the word from which jasper derives; scholars think that refers to green jasper (the rarest and most prized form in early times) rather than red jasper (the most common form). Yahalom is usually translated by the Septuagint as an "onyx", but sometimes as "beryl" or as "jasper"; onyx only started being mined after the Septuagint was written, so the Septuagint's term "onyx" probably does not mean onyx – onyx is originally an Assyrian word meaning ring, and so could refer to anything used for making rings. Yahalom is similar to a Hebrew word meaning hit hard, so some people think that it means diamond. The variation in possibilities of meaning for this sixth stone in the Hoshen is reflected in different translations of the Bible – the King James Version translates the sixth stone as diamond, the New International Version translates it as emerald, and the Vulgate translates it as jaspis – meaning jasper. There is a wide range of views among traditional sources about which tribe the stone refers to. 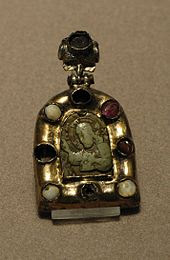 In a Christian New Testament parable, Jesus compared the Kingdom of Heaven to a"pearl of great price" in Matthew 13: 45–46. "Again, the kingdom of heaven is like unto a merchant man, seeking goodly (fine) pearls: Who, when he had found one pearl of great price, went and sold all that he had, and bought it."

The language of symbolism was in common use around the time of Jesus Christ; most people were familiar with the symbolic meanings. The circle is a symbol of God because it has no beginning and no end. The circle or pearl was considered to represent Love, Knowledge (the combination of equal amounts of Love and Knowledge is a symbol of Wisdom, the 2 circles intertwined (owl eyes) is symbolic of Wisdom. Some other pearls are Truth, and Faith.

The twelve gates of the New Jerusalem are reportedly each made of a single pearl inRevelation 21:21, that is, the Pearly Gates. "And the twelve gates were twelve pearls; every gate was of one pearl: and the streets of the city were pure gold, as if transparent glass."

Holy things are compared to pearls in Matthew 7:6. "Do not give dogs what is holy, and do not throw your pearls before pigs, lest they trample them underfoot and turn to attack you."

Pearls are also found in numerous references showing the wickedness and pride of a people, as in Revelation 18:16. "And saying, Alas, alas, that great city, that was clothed in fine linen, in purple and scarlet, and decked with gold, and precious stones, and pearls!"

Posted by DarcelRose at 4:58 PM No comments:

Email ThisBlogThis!Share to TwitterShare to FacebookShare to Pinterest
Labels: pearl 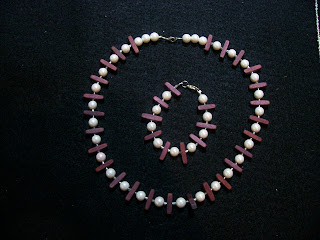 18" of Rectangle Redwood and Pearls
Lobster clasp
7" Bracelet
Posted by DarcelRose at 4:32 PM No comments: 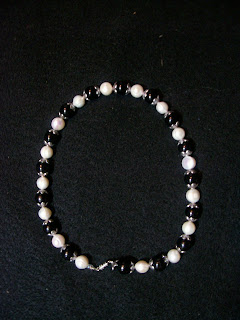 Posted by DarcelRose at 3:21 PM No comments: 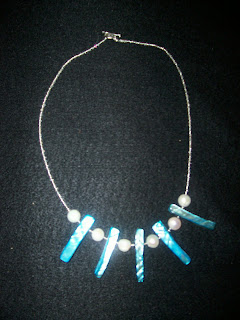 Posted by DarcelRose at 12:06 PM No comments: 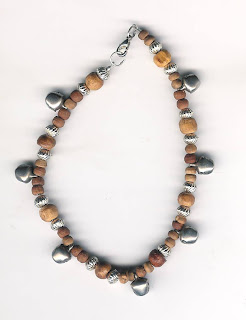 If you would like a color not listed, please contact me and inquire about availability.
Posted by DarcelRose at 4:22 PM No comments: